As February comes to an end, we round out Black History Month with a spotlight on William “Doc” Key, a self-taught veterinarian who taught his horse Jim Key how to read, write, and calculate math problems. Teaching a horse these skills might sound preposterous, but Doc was able to nurture Jim’s ability through kindness, patience, and empathy. Together they traveled throughout the United States and impressed audiences with Jim’s amazing performances. In the process, they broke racial barriers and raised awareness for the humane treatment of animals.

Here’s what Donna Janell Bowman, author of Step Right Up: How Doc and Jim Key Taught the World About Kindness, had to say about William “Doc” Key’s legacy and the amazing duo’s story:

END_OF_DOCUMENT_TOKEN_TO_BE_REPLACED 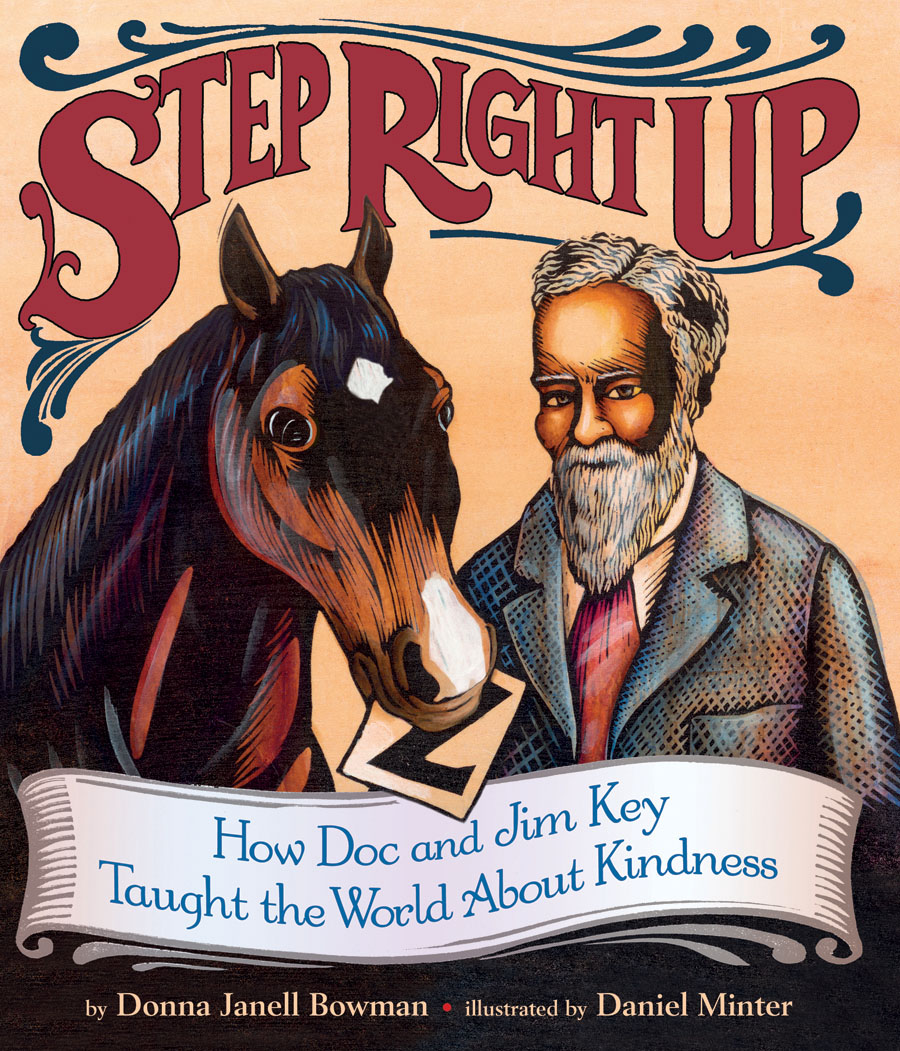 Step Right Up: How Doc and Jim Key Taught the World About Kindness is a biography of William “Doc” Key, a formerly enslaved man and self-trained veterinarian who taught his horse, Jim, to read, write, and do math. Together they became a famous traveling performance act and proponents for the humane treatment of animals around the turn of the twentieth century. In this interview, author Donna Janell Bowman discusses the power of Doc and Jim Key’s message of kindness and what inspired her to write about one of the most famous performing duos in the country.

END_OF_DOCUMENT_TOKEN_TO_BE_REPLACED

Today, we are celebrating Tankborn by Karen Sandler. First published in 2011, Tankborn was one of the original launch books for our Tu Books Imprint, which publishes diverse middle grade and young adult literature. Since its launch, Tu has published nearly 20 titles for older readers featuring diverse characters, stories, and worlds. Tu Books also established the New Visions Award, an annual writing contest for unpublished authors of color (and today is the deadline for submitting your manuscript!). END_OF_DOCUMENT_TOKEN_TO_BE_REPLACED

Thanks to movements such as We Need Diverse Books, #1000BlackGirlBooks, and vocal authors, writers, and readers, the conversation regarding diversity in children’s books has gained more traction. Studies such as the Cooperative Children’s Book Center’s Publishing Statistics on Children’s Books and our Diversity Baseline Survey have helped to supplement these conversations, highlighting the need for more representation in children’s literature. We’re starting to see more stories that represent people from different backgrounds and different ways of life, and stories with protagonists and heroes that finally look like us. Here at LEE & LOW BOOKS, our mission is to publish children’s books about everyone and for everyone. So today, LEE & LOW staff share the impact and importance of diversity and what diversity truly means to them.

END_OF_DOCUMENT_TOKEN_TO_BE_REPLACED

Before my big move to the publishing industry, I worked in the corporate world of fashion and apparel (and a small stint in home furnishings). There were many times when I’d look forward to seeing what new styles would pop up on the runway during NYC Fashion Week. I’d even spend my lunch breaks gazing at every single design captured perfectly by photographers at the right moment. I knew in my head that most, if not all, those pieces I probably wouldn’t wear (and let’s be honest could never even afford), but anyone can dream.

END_OF_DOCUMENT_TOKEN_TO_BE_REPLACED

Tiny Stitches: The Life of Medical Pioneer Vivien Thomas is the compelling story of Vivien Thomas, an African American surgical technician who developed the first procedure used to perform open-heart surgery on children. In this interview, author Gwendolyn Hooks discusses the legacy of this medical pioneer and what inspired her to write about a man whose research helped to save countless lives.

END_OF_DOCUMENT_TOKEN_TO_BE_REPLACED

Earlier this month, we highlighted the impressive work happening in the classroom of Jessica Lifshitz, veteran educator in Northbrook, Illinois. Following her popular essay on how Jessica empowered her fifth grade students to analyze their classroom library for its culturally responsiveness and relevancy, she shares in this interview with LEE & LOW BOOKS why she wanted to take on this project with her students, where families and administrators fit into this process, and her hopes for her students.

END_OF_DOCUMENT_TOKEN_TO_BE_REPLACED

Today, we are celebrating Richard Wright and the Library Card, an inspirational story for children of all backgrounds. This book shares a poignant turning point in the life of a young man who became one of this country’s most brilliant writers, the author of Native Son and Black Boy.

END_OF_DOCUMENT_TOKEN_TO_BE_REPLACED

This year’s Tony Awards will be broadcast on Sunday, June 12, 2016. We posted our first infographic and study on the Diversity Gap in the Tony Awards in 2013. In 2014, we did a brief follow-up post. In 2015-2016, there was such a pronounced uptick of diverse productions on Broadway that we felt it was worth updating our infographic and taking another look at diversity in the theater industry.

This year, Broadway megahit Hamilton—which almost exclusively stars actors of color—broke Tony records with a whopping 16 nominations. Add to that nominations for The Color Purple, Eclipsed, and Shuffle Along, and we’re in a year where conceivably all the main acting Tonys could go to people of color.  But is this year’s diversity a sign of lasting change, or an anomaly? To find out, we touched base again with award-winning writer, actor, and director Christine Toy Johnson to get her take on the current state of diversity in theater. Welcome, Christine! END_OF_DOCUMENT_TOKEN_TO_BE_REPLACED

Who We Are
Requesting Review Copies
Lee & Low Books
END_OF_DOCUMENT_TOKEN_TO_BE_REPLACED