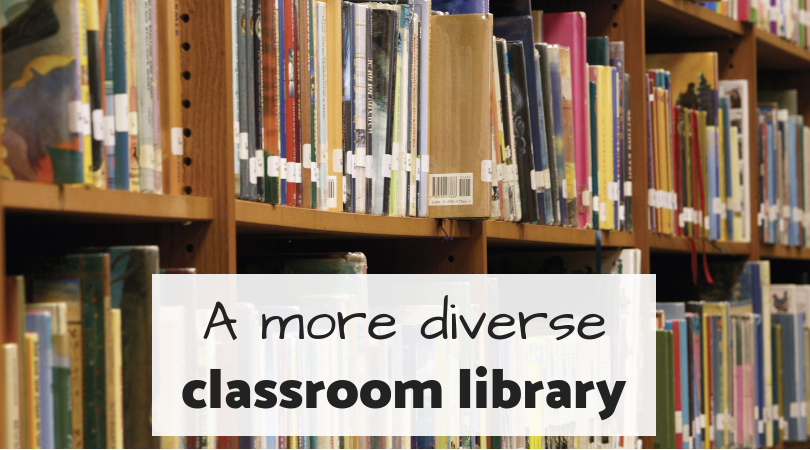 New year, new goals! If one of your professional goals this year is to add more diversity to your school or classroom library, we’re here with some inspiration to get you started. In the following blog post, originally posted at the Center for the Collaborative Classroom and cross-posted with permission, our Director of Curriculum and Literacy Strategy Jill Eisenberg shares tips and suggestions for how to move forward without becoming overwhelmed: END_OF_DOCUMENT_TOKEN_TO_BE_REPLACED

In this guest post, originally posted at EdWeek and reposted here with permission, Philadelphia-based teacher Kathleen Melville shares the “Where’s My Story” project she developed to teach her ninth-grade students about diversity—or the lack thereof—in children’s books.  END_OF_DOCUMENT_TOKEN_TO_BE_REPLACED

As February comes to an end, we round out Black History Month with a spotlight on William “Doc” Key, a self-taught veterinarian who taught his horse Jim Key how to read, write, and calculate math problems. Teaching a horse these skills might sound preposterous, but Doc was able to nurture Jim’s ability through kindness, patience, and empathy. Together they traveled throughout the United States and impressed audiences with Jim’s amazing performances. In the process, they broke racial barriers and raised awareness for the humane treatment of animals.

Here’s what Donna Janell Bowman, author of Step Right Up: How Doc and Jim Key Taught the World About Kindness, had to say about William “Doc” Key’s legacy and the amazing duo’s story:

END_OF_DOCUMENT_TOKEN_TO_BE_REPLACED

Set to be released this spring, ¡Olinguito, de la A a la Z! / Olinguito, from A to Z! : Descubriendo el bosque nublado / Unveiling the Cloud Forest takes readers into the magical world of a cloud forest in the Andes of Ecuador. We discover the bounty of plants, animals, and other organisms that live there as we help a zoologist look for the elusive olinguito, the first new mammal species identified in the Americas since 1978. It has received starred reviews from Publishers Weekly, School Library Journal, and Kirkus Reviews, which called it “a breath of fresh air in the too-often-contrived world of bilingual books.” END_OF_DOCUMENT_TOKEN_TO_BE_REPLACED

On Tuesday, January 26, 2016 we will release the results of the Diversity Baseline Survey, the first major study to look at diversity among publishing industry staff. The Diversity Baseline Survey (DBS) focuses on four different aspects of diversity: race, gender, sexual orientation, and disability. The goal is to establish a baseline that shows where we are now as an industry, and that will help us measure progress moving forward.

The DBS was inspired by a similar movement in the technology industry, led by Pinterest engineer Tracy Chou. Tracy pointed to tech’s lack of diversity—and lack of data—and was able to galvanize the entire industry to release staff diversity figures in 2014. We posted a study on our blog called The Diversity Gap in Silicon Valley that breaks down the problem and the responses. After the tech industry released their statistics, several new initiatives were announced to encourage recruitment and retaining of diverse new talent. We wondered, could publishing do the same? END_OF_DOCUMENT_TOKEN_TO_BE_REPLACED

Last month, we were excited to announce the establishment of the Lee & Low and Friends Scholarship in conjunction with Simmons College. This scholarship will provide opportunities for students of color to enroll in the Simmons College graduate program in children’s literature, one of the country’s finest.

In this interview, we talk to two of the key players behind the new scholarship. Cathryn M. Mercier, PhD is the Director of the Center for the Study of Children’s Literature at Simmons College and the director of the center’s M.A. and M.F.A. programs. Jason Low is the Publisher/Co-owner of LEE & LOW BOOKS. END_OF_DOCUMENT_TOKEN_TO_BE_REPLACED

Released this month, Amazing Places is a collection of original poems hand-picked by acclaimed anthologist Lee Bennett Hopkins that celebrates some of the amazingly diverse places in our nation. It has received starred reviews from Kirkus Reviews and Publishers Weekly, which calls it “a broadly appealing testament to the American landscape and people.” END_OF_DOCUMENT_TOKEN_TO_BE_REPLACED

Discussion about diversity in books, at least around here, is often focused on the US market, but the challenges we face regarding diversity here in the United States don’t start and end within our borders. Many countries around the world find themselves struggling with the same growing gap between who is represented in their literature and who their citizens actually are.

The international scope of these problems presents us with a unique opportunity to learn from each other and to share knowledge. What works? What doesn’t? What else can we try? END_OF_DOCUMENT_TOKEN_TO_BE_REPLACED

In our new How We Did It series, we shine a spotlight on the people and
organizations doing important work to support diversity in publishing and beyond. Their stories and ideas are a dose of inspiration for all of us as we move forward in our work.

Today we are thrilled to have Kyle Zimmer, President, CEO, and Co-founder of First Book, with us. Here’s how Kyle describes her organization: “First Book supports educational equality by providing high quality, new and relevant books and educational resources to teachers and caregivers serving the millions of children growing up in low-income families.”  Welome, Kyle! END_OF_DOCUMENT_TOKEN_TO_BE_REPLACED

Who We Are
Requesting Review Copies
Lee & Low Books
END_OF_DOCUMENT_TOKEN_TO_BE_REPLACED