Next month is the release of Black Was the Ink by New Visions Award winner Michelle Coles and illustrated by Justin Johnson. Motivated by Coles’ frustration with the pace of racial progress in America, she wrote this book for readers to discover the critical work of Black congressmen during Reconstruction, an often overlooked time period, and make critical connections to present day.

Black Was the Ink, an extraordinary work fueled by rigorous research and impactful history, is a critical text for high school students and educators looking for authentic, honest history about the United States.

The accompanying Teacher’s Guide for Black Was the Ink offers resources and tips on how to guide discussions on Reconstruction, the relationship between the Black Congressmen and White allies, the connection to the Black Lives Matter movement today and much more. Other features of our guide include summary and background information, pre-reading and discussion questions, ideas for reader’s response and writing activities, strategies for ESL/ELL, and interdisciplinary activities and connections. Below we’ve shared a few pre-reading questions, discussion questions, and resources from the Black Was the Ink Teacher’s Guide. 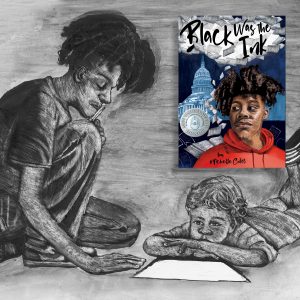 Malcolm Williams hasn’t been okay for a while. He’s angry and despondent and feels like nothing good ever happens for teens like him in D.C. With growing violence in his neighborhood, his mother ships him off to his father’s family farm in Mississippi, and Malcolm is anything but pleased.

As Cedric, Malcolm meets the real-life Black statesmen who fought for change during the Reconstruction era: Hiram Revels, Robert Smalls, and other leaders who made American history. But even after witnessing their bravery, Malcolm’s faith in his own future remains shaky, particularly since he knows that the gains these statesmen made were almost immediately stripped away. If those great men couldn’t completely succeed, why should he try? Malcolm must decide which path to take. Can Cedric’s experiences help him construct a better future? Or will he resign himself to resentments and defeat?

Malcolm experienced a physical and emotional reaction when he visited Emanuel A.M.E. church after the Hamburg massacre rally. Many historians, scholars, and mental health experts talk about how generational trauma can affect survivors and their descendants mental and physical health for generations. What is generational trauma and what impact could it have on individuals who are part of communities who have experienced trauma, genocide, displacement, incarceration, and racial violence?

Analyze the role of White allies and what it looks like in Black Was the Ink. What does Malcolm learn about the role of allies in the Black freedom movement? Show evidence from the text about how Malcolm’s perspective on the role of White allies changes in Black Was the Ink. Education scholar Bettina Love writes/speaks about the difference between an ally vs. co-conspirator. According to Love, what is the difference between an ally and a co-conspirator? In the text did we meet any co-conspirators? How so? What would it mean to be a co-conspirator today in the fight for voting rights? Students can share their opinions in an essay.

Have students read more stories and consult primary sources about the experiences of Black elected officials during Reconstruction. To help students with content knowledge about the various Black congressmen during Reconstruction they can consult Dray’s (2008) book Capitol Men: The epic story of Reconstruction through the lives of the first Black Congressmen or watch the PBS Reconstruction documentary presented by Henry Louis Gates Jr. (or read Congressman John Roy Lynch’s first-hand account in The Facts of Reconstruction). There are also a number of picture books about some of the men mentioned in this book: The Amazing Age of John Roy Lynch written by Chris Barton and illustrated by Don Tate, The Story of Civil Rights Hero Robert Smalls  by Janet Halfmann and illustrated by Duane Smith, and Seven Miles to Freedom: The Robert Smalls Story written by Janet Halfmann and illustrated by Duane Smith. The Library of Congress has a number of primary sources about the congressmen. Students can conduct research about these men and then write their own children’s book about the lives and experiences of the first Black congressmen and Reconstruction. This book would be a book that Malcolm should have had when he was little to learn about the truth about Reconstruction.

Read the rest of the Teacher’s Guide.

Find more information about Black Was the Ink here.

Preorder Black Was the Ink at:

Who We Are
Requesting Review Copies
Lee & Low Books
END_OF_DOCUMENT_TOKEN_TO_BE_REPLACED