Today is the release day for Boy, Everywhere by debut author A. M. Dassu! In this powerful middle-grade debut, Sami and his family embark on a harrowing journey to save themselves from the Syrian civil war.

Watch author A. M. Dassu talk about why she wrote Boy, Everywhere. And read on to learn more about what moved Dassu to write this story, her experience and work with refugees, and the feedback she’s received from Syrian readers.

Tell us about your work with Syrian refugees.

A. M. Dassu: I have been fundraising for charities for almost a decade, and charity workers connected me with families that resettled in the UK. I wanted to personally support them within my community, so I’ve spent time with various Syrian families and also travelled to meet refugees in London.

I have met so many refugees in England whose stories I’ll always remember: some who are studying again so they can use their skills in the U.K. too, some who aren’t allowed to work and so are skillfully growing vegetables while they wait for the government to decide if they can live here, some who are working in restaurants when they used to be department store buyers, some who are helping other refugees either by working in refugee organizations or by offering personal financial support with the little money they have themselves.

The one story that really stayed with me is from a refugee who had lived in the suburbs of Damascus and worked as an architect there, and was now doing a master’s in architecture in the U.K. He told me that they were discussing plumbing during one of his workshops at university and when he shared his thoughts on how to solve a particular problem, his tutor said, “How would you know, you don’t have bathrooms in Syria.” This man had a big house with four bathrooms!

It was clear that the stereotypes that had taken hold over the years due to media reports were continuing to impact refugees even after resettlement. I wanted to challenge them and show the real people I knew; people who wouldn’t have left home had their lives not been upended by war, people with a wide range of occupations, backgrounds and skill sets, people who had dignified lives, and were not simply victims of war who had been reduced to a “refugee” label. And the best thing about the process has definitely been meeting lifelong friends in and from another country whom I adore.

Although you are not Syrian, what in your own experiences moved you to write this story?

A. M. Dassu: All my characters’ experiences were written from various observations in my own life and also from the accounts of refugees.

While I was born in the U.K., my family story is also one of cross-cultural relocation and immigration, so this was already a topic close to my heart. I know what it’s like to come from a wealthy, educated family that is forced to leave everything behind and start again. My family originated in Iraq until my great-great grandfather left and like Sami’s family moved across countries and continents. Decades later, my grandfather’s first wife and daughter drowned on a boat journey to Tanzania. My mum was highly educated and when she arrived in the U.K. she had to work in a factory and sew garments, which was a huge shock to her. It took her years to top up her qualifications and reestablish herself just like Sami’s dad has to when he gets to the U.K.

My grandparents had left behind a life that included nannies, drivers and businesses in two cities, only to arrive to a cold, unwelcoming country, forced to live in a small terraced house with no heating. My grandfather got depressed before finding the energy and drive to establish himself once again. All of these experiences in my own family meant I was encouraged to appreciate everything I had and to give support to others whenever they needed it in whatever capacity I could. Because the sad reality is that a cruel twist of fate can bring loss on such a devastating scale upon any of us.

Talk about some of your work in Diversity & Inclusion efforts and initiatives.

A. M. Dassu: I am a director of Inclusive Minds, which is a unique organisation for people who are passionate about inclusion, diversity, equality, and accessibility in children’s literature. We have a big network of Inclusion Ambassadors from across the country with diverse lived experiences of race, ethnicities, LGBTQIA+, neurodivergence and disabilities.

We give them opportunities to amplify their voices at events and publishers can request to work with one of our Inclusion Ambassadors as an expert reader on books in progress. They are not sensitivity readers and we ask publishers to involve them much earlier in the process to help with the development of authentic characters from the very start.

I wrote Boy, Everywhere with the intention to not only challenge stereotypes but also to financially support and help refugees. My plan with my advance has been to benefit refugees. When I read that the We Need Diverse Books (WNDB) Walter Grant helped Angie Thomas buy a laptop to write The Hate You Give, I wanted to do the same for a refugee or recent migrant who loves to write, but doesn’t have the financial capital to spend time or gain the support to do it.

It is difficult to write when you have had to flee to another country and lost everything, but I hope I will be able to help someone who is ready to take that next step to tell their story. If I can help one refugee or recent migrant to make progress in their writing journey, my life will be made! 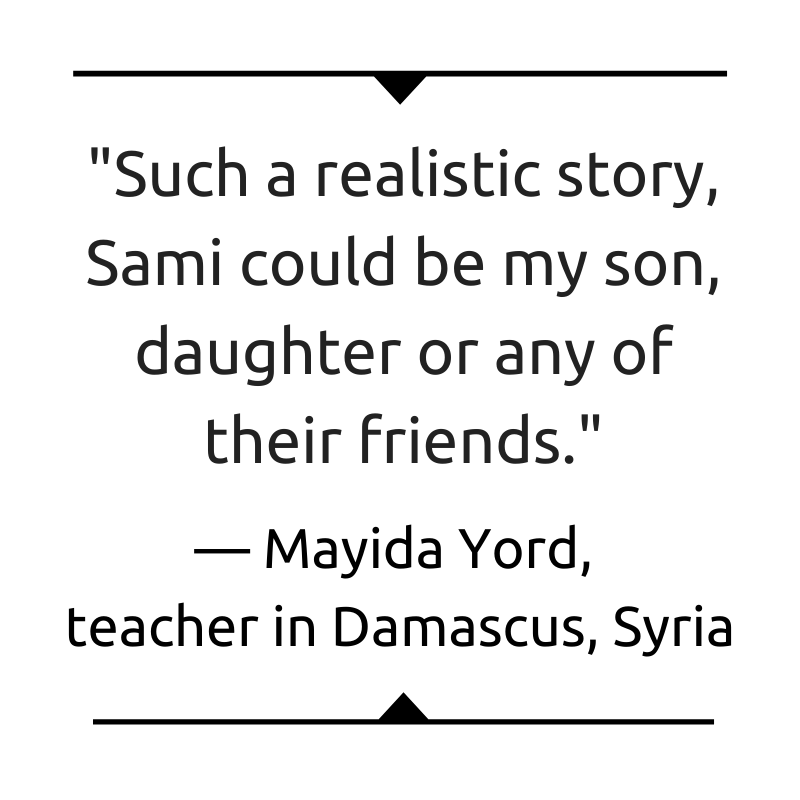 What feedback have you received? And what have Syrian readers had to say about Boy, Everywhere?

A. M. Dassu: Nadine Kaadan, a children’s book author and illustrator from Damascus who moved to the U.K. after the war began, gave me invaluable advice about how the middle class in Damascus experienced the war. My dear friend Majida in Damascus spent an unbelievable amount of time answering my questions and fact-checking the story. It was serendipitous that her family in Damascus mirrors the family in my novel: she is a teacher, her husband a surgeon and they have a son who is twelve and a younger daughter. And she passed the book on to her students and son, who also gave me encouraging feedback and told me that the characters in the story could be them, and the book said exactly what they wanted the world to know.

I also relayed scenes and details to refugees who couldn’t read it to ensure I had depicted their experiences accurately. Even after line edits were done, I continued to recheck details in the story and friends in and from Damascus would share pictures of their neighbourhoods to reassure me I’d depicted Damascus correctly. I knew I was taking on a huge responsibility, and I wanted to ensure that I had represented Syrians and refugees accurately and the way they deserve to be portrayed.

Here’s what readers had to say about Boy, Everywhere:

“Such a realistic story, Sami could be my son, daughter or any of their friends.”—Mayida Yord, teacher in Damascus, Syria

“I can’t think of a more empowering book about Syrian refugees… A must-read for anyone who wants to expand their minds, bookshelves, and most importantly, for those who want to overcome and challenge the negative stereotypes of Syria and Syrian refugees in literature.”—Nadine Kaadan, author and illustrator from Syria

“[Boy, Everywhere] marks the truth of our reality here in Syria, and most importantly shows the message we always wanted to blurt out.”—Layla Jazairy, student in Damascus, Syria

“A fantastically well-researched and empathetic story that gives humanity and respect to those seeking sanctuary, busting a number of stereotypes about refugees along the way.”—Amnesty International

Order your copy of Boy, Everywhere:

A. M. DASSU won the international We Need Diverse Books mentorship award in 2017. She is the deputy editor of SCBWI-British Isles’ Words & Pictures magazine and a director at Inclusive Minds, an organization for people who are passionate about inclusion, diversity, equality, and accessibility in children’s literature. Her work has been published by The Huffington Post, the Times Educational Supplement, SCOOP Magazine, Lee & Low Books, and DK Books. She lives in the heart of England. You can find her on Twitter as @a_reflective or at amdassu.com.

One thought on “An Interview with A.M. Dassu, author of Boy, Everywhere”

Who We Are
Requesting Review Copies
Lee & Low Books
END_OF_DOCUMENT_TOKEN_TO_BE_REPLACED