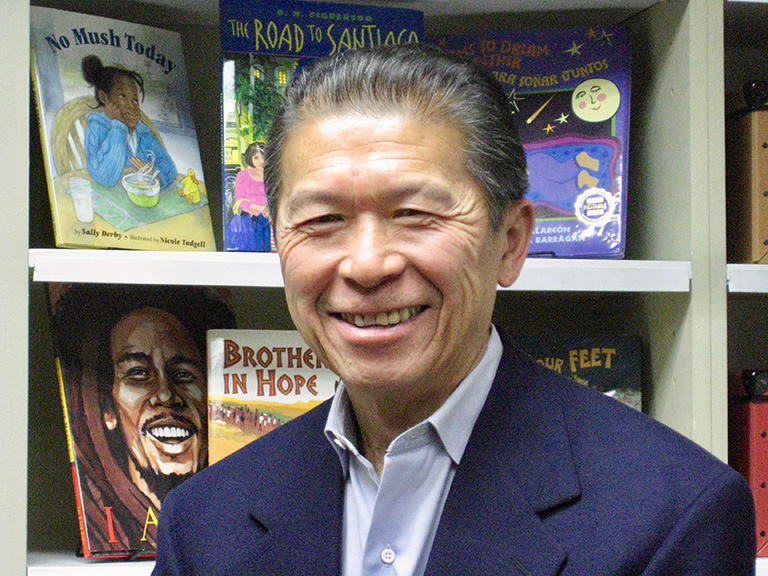 With deep sadness, Lee & Low Books announces the passing of co-founder and CEO Tom Low. Tom passed peacefully at home, surrounded by family. His youngest son, Lee & Low president and co-owner Craig Low, confirmed the cause was cancer. An obituary can be found on Publishers Weekly.

Tom co-founded Lee & Low Books in 1991 with Philip Lee, after a successful career running his own temporary personnel agency. Both Tom and Philip were dismayed by the lack of multicultural literature for children, and felt strongly that there was a business opportunity for a publisher to address that gap.

“It was a joy and privilege to be his partner in starting Lee & Low,” says Philip Lee, who left the company in 2004. “He was a great friend, mentor, and visionary. It meant a lot to him to build a company that would promote diversity, encourage new voices, and nurture a new generation of publishing professionals.”

Tom was an out-of-the-box thinker who helped forge a unique path for Lee & Low when there was no obvious model to follow. Coming from outside the industry enabled him to look at every facet of book publishing from a fresh perspective, which made it easier to depart from traditional norms. His sharp business acumen and entrepreneurial spirit guided Lee & Low’s growth and helped the company continue to adapt through many changes in the industry.

Tom’s sons Craig and Jason Low joined the company in the late 1990s and eventually took on leadership roles. As Tom scaled back his involvement in day-to-day activities over the last few years, he continued to oversee rights and permissions, where he showed his mettle as a tough negotiator, always firm in his belief in the quality and value of what Lee & Low had to offer. “For those who had the opportunity to know him, they often admired his graciousness, leadership, humanity, and keen focus on equity,” said Craig Low. “He held a high moral standard and led by example. He could be hard-nosed but was also humble, and I learned a great deal from him about life, family, and business.”

Under the Low family’s leadership, Lee & Low Books has remained at the forefront of diversity issues through initiatives like the Lee & Low and Friends Scholarship with Simmons College and the industry-wide Diversity Baseline Survey. The company received the 2016 Angel Award from the Carle Honors for “inspiring so many people with its dedication to multicultural books and to a new generation of artists and authors who offer children both mirrors and windows to the world.” As the company prepares to celebrate its thirtieth anniversary next year, Lee & Low Books is living proof that there is—and always has been—a strong market for diverse literature.

“Tom was an incredible and inspiring leader who reminded us of our mission and our potential as a company. Editorial always prepared our acquisitions materials with Tom in mind. We tried to anticipate what questions he would ask, and no matter how much we prepared, he always managed to throw a curveball,” remembered Lee & Low senior editor Jessica Echeverria.

Tom valued not only Lee & Low’s authors and illustrators, but the deep talent of the Lee & Low team. “He was a big believer in people,” said publisher and co-owner Jason Low, Tom’s oldest son. “He always said that we had the best people working for us, which we were fortunate to be able to cultivate over many years. The Lee & Low family are a collection of the most dedicated individuals who have helped us get through this difficult time.”

Tom will be deeply missed by all who knew him. “He was so much more than the company co-founder,” said Louise May, Lee & Low editor-at-large, who began working at the company in 1999. “While his leadership and perspective guided the company in its formative years, he was also always our greatest fan, cheerleader, advisor, and overall sounding board. He valued everyone who worked for the company and believed wholeheartedly in encouraging growth and promoting from within. And over the years he became more than my boss. He was also my friend.”

“I felt the books that we published were important,” Tom once said of the company’s mission. “It turns out we were right.”

Because of the pandemic, there will be no memorial service at this time. Well-wishers are encouraged to send a donation to one of Tom’s favorite charities: The Fresh Air Fund, Scenic Hudson, or North Shore Animal League America. Condolence cards can be sent to:

Who We Are
Requesting Review Copies
Lee & Low Books
END_OF_DOCUMENT_TOKEN_TO_BE_REPLACED