Last year, we brought back the beloved chapter book Rafi and Rosi series, which follows two Puerto Rican tree frog siblings as they explore their surroundings and learn about the traditions, animals, and environment of Puerto Rico. The series is available in both English and Spanish, and is a great way to introduce early readers to chapter books! 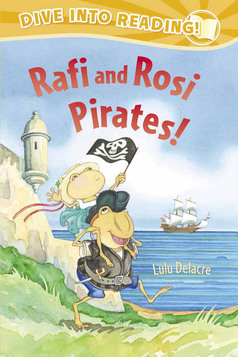 This year, we’re excited to have released a new original addition to the series in both English and Spanish: Rafi and Rosi Pirates! and Rafi y Rosi ¡Piratas! In this book, Rafi and his younger sister, Rosi, are excited to visit El Morro Fort, the four-hundred-year-old fortress that guards the entrance to San Juan harbor. At the fort they pretend to be pirates, engage in a fierce battle, and learn about Roberto Cofresí, Puerto Rico’s most famous pirate. During a game of hide-and-seek, Rosi finds the perfect place to hide—in the stone sentry box that once housed the fort’s lookout guards. Little does she know that the sentry box might be haunted!

Our Literacy Specialist Katie Potter shares some tips on using chapter books such as the Rafi and Rosi series in the classroom:

The Rafi and Rosi series can be used in a variety of ways to work with students on their reading skills. Use the series to work on fluency. Pair two students together and have them do a role play or reader’s theatre with one student acting as Rafi and the other student acting as Rosi. Ask students to think about how actors sound in television shows or movies, and how Rafi and Rosi would sound based on their feelings expressed in the book.
Another wonderful element to the Rafi and Rosi series is the rich background content that Lulu Delacre includes in all of her books about Puerto Rico and the different environmental or cultural elements referenced in the text. After reading, work with students on the Did you know…? section in the back of the book. Tell students that these are sometimes called “Afterwords,” which are always helpful in learning more about the book.
Lastly, work on character mapping with the Rafi and Rosi series. Encourage the students to read the whole series, and build on Rafi and Rosi’s character maps by adding different personality traits to their respective character webs. Ask students: how are Rafi and Rosi similar? How are they different? See the Teacher’s Guide for Rafi and Rosi here.

See the Teacher’s Guide for Rafi and Rosi Carnival! here.

Check out these printable activities here.

Who We Are
Requesting Review Copies
Lee & Low Books
END_OF_DOCUMENT_TOKEN_TO_BE_REPLACED