Amy Koester is the Youth & Family Program Coordinator at Skokie Public Library, where she

selects fiction for youth birth through teens and oversees programming aimed at children through grade 5. She is the chair of the ALSC Public Awareness Committee, and she manages LittleeLit.com and is a Joint Chief of the Storytime Underground. Amy has shared her library programs, book reviews, and musings on librarianship on her blog The Show Me Librarian since early 2012.

This post originally appeared on her blog The Show Me Librarian, and is cross-posted with her permission.

There is a conversation happening on the Storytime Underground Facebook Group right now. It’s been going on for a few days, actually, and it seems to have started innocuously enough: with a question about folks’ thoughts on the Youth Media Award winners, asked by a person who expressed “major shock” and disappointment (via frown-y face emoticons) about one of the Caldecott honors. As I said; innocuously enough.

Some folks who added to the thread brought up the perennial gripe that not all the recognized titles seem to have much kid appeal; other voices jumped in to clarify that kid appeal is not part of the criteria for any of the major YMAs awarded by ALSC and YALSA. I find this argument annoying the same way I do a mosquito bite, because it pops up every year around the same time and is irritating but will disappear in a week. After all, there are awards that take kid appeal into account.

But. Then something ugly and uncomfortable popped up. People started talking about certain books not appealing to kids or their entire communities for one reason: because said certain books have diverse protagonists.

After reading the full thread and seeing this build-up of negative dialogue specifically around diverse award-winning titles in collections, I responded:

“I find it extremely problematic to suggest that a library doesn’t need a book–award-winner or not–that features a minority protagonist on the basis that there aren’t many readers of that minority who use the library. To me, that suggests both a bias on the part of selectors as well as a lack of trust in the readers we serve. We know verifiably that young readers do not only want to read about characters whose lives are like their own, and keeping them from even having the option to try a book about a person who is different from them is bordering dangerously on censorship. If a particular child does not want to read a particular book, so be it; but, especially in a public library, children should have that option.”

I am going to expand on that a bit.

First, and frankly, I find the position “because we don’t have X readers in my library, we don’t need X books” to be racist. This position implies that we as selectors view diverse books as inherently less-than. If we argue that only black youth will want to read about black youth, we are really saying that the experiences of black youth have no relevance or meaning to youth of any other race. We are saying that the experiences of the youth in the books we do buy have broader relevance and resonance. That is the very definition of otherizing and making a particular perspective, experience, or group less-than.

The position that “because we don’t have X readers in my library, we don’t need X books” also denotes a fundamental lack of respect for the children we are supposed to be serving. It suggests that we think our young readers cannot handle, relate to, or be expected to understand an experience that does not mirror their own. Not collecting—and collecting but not promoting—titles with diverse protagonists projects the selector’s own bias onto the reader instead of letting readers freely encounter stories and information.

Also, I feel very strongly that if the excellent diverse books in your collection do not circulate, you are not doing your job of getting great books into the hands of readers. As librarians, we can sell any great book to the right reader. We can find the aspects of a title that will appeal to the range of readers we serve. Diverse books have the exact same appeal factors as the whitewashed majority of children’s publishing. So we can be professionals and make our readers’ advisory about appeal factors, or we can continue to always take kids interested in sports reads to Matt Christopher or Tim Green instead of to Kwame Alexander. But if we do the latter, we are part of the problem. If we omit diverse titles from our RA even though those exact same appeal factors are there, we are perpetuating a racist status quo.

I want to take a moment to step outside of what I have to say on this topic and share what some other professionals have said*:

When it comes down to it, a major aspect of this topic is selection/collection development, and the fact that selection is a privilege. If you select materials for your readers, you are privileged to get to influence not only what children read, but what they have access to in the first place. And when I read arguments against including diverse titles, or questions about why we have to talk about this topic, it puts into sharp focus for me the fact that we have to recognize our privilege as selectors, and, more than likely, as white selectors for diverse readers. 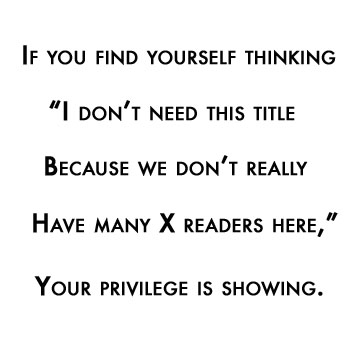 If you find yourself thinking “I don’t need this title because we don’t really have many X readers here,” your privilege is showing. You have probably never had to open more than one or two books in a row in order to find a character who looks/speaks/lives like you do. That is privilege. And whether we intend it to or not, our privilege influences our thinking and our decisions. This is a problem because our decisions affect the capabilities of young readers to find books in which they can find themselves and in which they can meet new people.

Confronting our privilege is hard. It is uncomfortable. I am acutely aware that, because of my privilege as a white woman, I don’t have to write this post. No one would begrudge me for not speaking up on this topic publicly. In fact, it would probably be a lot easier, and I would seem a lot nicer, if I didn’t write this post.

But that course of action is no longer acceptable to me. I am no longer going to privately roll my eyes when professional colleagues make privileged statements about their exclusionary practices, or when reviewers ignore microaggressions in books for youth. I am going to say something, because ignoring it only lets it perpetuate. And when someone calls me out on something I say or causes me to think critically about my own practice, I am going to try really, really hard not to get defensive and to just listen and reflect and improve. It is hard. And I don’t need to do it.

Except that I do, because the ability of every child I serve to feel valuable and see themselves as a beautiful, complex individual is what hangs in the balance.

This is not about our comfort, or our personal convictions, or what we think we know definitively after doing this job a particular way for so many years.

It is about the children we serve. Every single one of them.

*Because these conversations have been happening in public forums (a public Facebook group and on Twitter), I feel that sharing direct quotations is not a breach of anyone’s privacy. I have made the decision to share these quotes without identifying the speakers, as my ultimate goal is constructive conversation about privilege in selection for youth libraries, not alienating or shaming members of the community.

7 thoughts on “Selection Is Privilege”

Who We Are
Requesting Review Copies
Lee & Low Books
END_OF_DOCUMENT_TOKEN_TO_BE_REPLACED