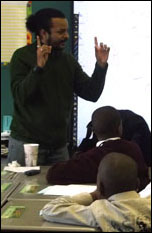 important. Guest blogger, author/poet Tony Medina talks about growing up in the projects without books and later as an author witnessing the true power of connecting multicultural books with children of color.

As a child in the Throgs Neck Housing Projects in the Bronx, I did not grow up with books. The only person I saw reading was my grandmother, who occasionally read mass-market paperback fiction and her Bible that was as big as a phone book. If the Bible fell from the top of the dresser where she kept it, it could take your kneecap off and crush your foot in the process! The only time I recall being exposed to children’s books was at school when the teacher took us to the school library and the librarian allowed us to take out Curious George books.

It was as an adult that I really began to appreciate children’s books. I remember being fascinated by the marriage of art and text. The stories and poems were depicted so beautifully and richly that it seemed as if they blended together seamlessly, creating a world by which even adults would be captivated. I knew right then that I wanted to be part of that magic. I thought, if I as a grownup can be taken with the majesty of these portable art galleries and museums, children must truly love them.

Soon after, I began buying children’s books and taking some out from the library. I not only found myself interested in the wonderful stories and poems, I wanted to teach myself how to write them—by reading them. The more I browsed through shelves in bookstores and libraries, the more I noticed that many of the books I came across did not speak to or from the point of view of a kid like me from the projects. I yearned to read about what a child from the ’hood had to say about his life and his world. I remember reading an interview with the African American novelist and Noble Prize-winner Toni Morrison, She said she wrote the books she wanted to read. That nugget of wisdom stayed with me as I made my way to fulfilling my dream of becoming a writer.

By the time I decided to write my own children’s books, a child’s voice began to present itself in my mind. It belonged to a kid named DeShawn Williams, and he was talking about his life growing up in the projects. Not surprisingly, his words seemed to mirror my experiences as a child. Poems in DeShawn’s voice began to take hold of me and I began to write them down. Before I 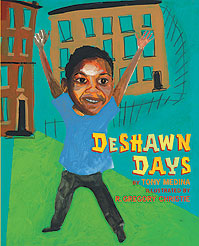 knew it, DeShawn was telling me about the people he loved and lived with: his mother, who was in college; his grandmother, who helped raise him; his uncle, who stood-in for his absent father; his cousin Tiffany, who was like his sister, even though they fought like crazy; and his best friend from school, Johnny Tse, who taught him Karate, which he assumed was from China, but finds out was from Japan. Thus, DeShawn Days, my first book for children, was born.

There was no greater feeling than to see the publication of DeShawn Days, which was initially embraced in manuscript form by my editor and subsequently published by multicultural children’s book publisher, Lee & Low Books. At that time, no books like DeShawn Days were around. The only thing that topped seeing DeShawn Days out in the world was sharing it with children, particularly children who came from a world similar to DeShawn’s. I remember encountering a youngster who had the same name—DeShawn—who was also being raised by his grandmother. This boy exclaimed about me, the author, “How does he know about my life?”

This experience made me realize in a real way, outside of my own literary aspirations, the power of books: how they can matter and make a profound difference in a child’s life, especially when they speak to and from the child’s own experiences and validate his or her life.

4 thoughts on “Growing Up without Books: Discovering DeShawn”

Who We Are
Requesting Review Copies
Lee & Low Books
END_OF_DOCUMENT_TOKEN_TO_BE_REPLACED